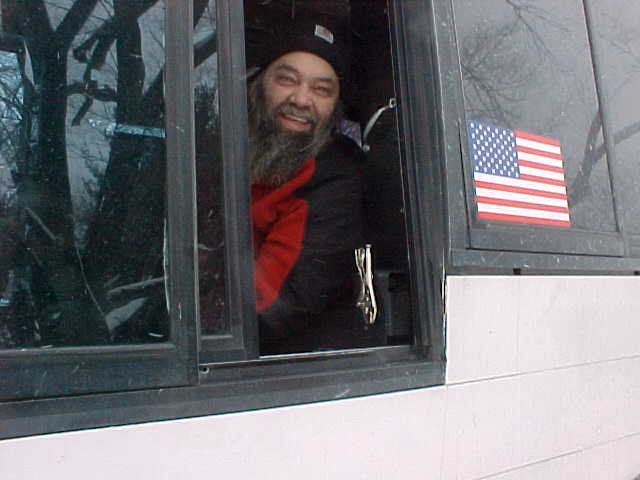 The Dimenet Network has an extensive memorial page for Roland Sykes with images, quotes, writings and testimonials. We’ve included a couple of items from the people he touched:

Roland was a miner who broke his back in a work accident some years ago. He was instrumental in IL (Independent Living) and ADAPT (American Disabled for Attendent Programs Today) movements.

His lively sense of humor and willingness to break down barriers (literally) were legendary.

If ever there was an ADAPT warrior moving on to Valhalla, it is Roland! His strong, unwavering support for disability rights from the way back days to today was one of the mainstays of our movement.

He moved us forward with his promotion of the Internet, DIMENET, virtual CILs and more. His humor, passion for disability rights and persistence were wonderful additions to our discussions all through the disability community. His behind the scenes support for ADAPT helped build and strengthen our network in countless ways.

The Big White Cloud (the bus) will remain a symbol of his mission and his ministry, and he will live on in those who loved him so well.”

“Today we lost a great patriot and disability advocate, Commander Roland Sykes. To many of you he was Roland the computer guy, others knew him as the bus driver of the “White Cloud” at ADAPT actions, but to me he was my friend, my mentor and a man I greatly respected and admired.

I first met Roland in 1984, at a NCIL conference, where he was running around with a headset on his head listening to make sure the assistive listening system was working, all the while taking notes on his laptop computer. That is how I first got to know the man we know as Roland Sykes, also known as Commander Sykes, a strong and proud leader, one of the best disability advocates I have known in my life. Roland was a hardcore advocate; he looked at life through the eyes of a commander, looking at all sides, developing plans to help us move the issues forward. He knew from the beginning of his life with a spinal cord injury the way, the ONLY way, was to stand up and fight for your rights.

Roland was very involved in both NCIL and ADAPT during the 1980s, providing support with radios, strategy for the actions, and mainstreaming the use computers at centers for independent living. Roland was a director of the Abilities Resources CIL for a number of years during the 1980s. In the late 1980s he became the first director of the NIDR grant to NCIL, to develop and support a nationwide network of centers using computers and the Internet. In 1990, Roland and other leaders at the time started DIMENET, the national computer bulletin board system for centers which many of use used to learn how to use email and share files with each other. With the growth of the Internet into the World Wide Web Roland developed a package of computer hardware and software that promoted the services of independent living centers across the country.

Through out the 1990s Roland continued to promote using the Internet which has proved to be a powerful tool to organize the disability community. At the same time Roland was working on getting his master plan off the ground. That plan was to buy a bus and convert it into a rolling community of knowledge and entitlement that was accessible for him to live in, travel the country and help organize people with disabilities. This dream came true with the White Cloud, a forty foot transit bus with a wheelchair lift that he had custom made to meet his needs. This was a home on wheels with a built-in computer network, and space to carry many folks. In fact, over the past few years many folks attending ADAPT actions will remember riding in the big white bus, driven by the guy called Roland who only wanted to be known as the bus driver.

But we all know that he was so much more than just the guy driving the bus. He was a friend, mentor, advocate, warrior, commander, preacher, and more than anything a genuine American hero. He never sold out, he never took the easy way, and he was always about the right way of doing things and the right way to get your point across. When I told someone today that Roland had passed away her first respond was “he was a gentle man”.

Roland, how will I go on with the struggle with you gone? I know I will go on, a little sadder, but I will go on, because you taught me to believe in our fight for disability rights and freedom for our brothers and sisters. With that belief is the realization that our path ahead is filled with many obstacles and we must move as many as we can, so the next guy will have an easier time moving forward.

Roland, you are my brother, you have helped me through so many difficult times and places, and without you life will be a little sadder, but thanks for sharing part of your life with me, my life is richer for it and I am grateful for the time we had. I am happy to call you my friend, I love you Roland!”–Paul Spooner