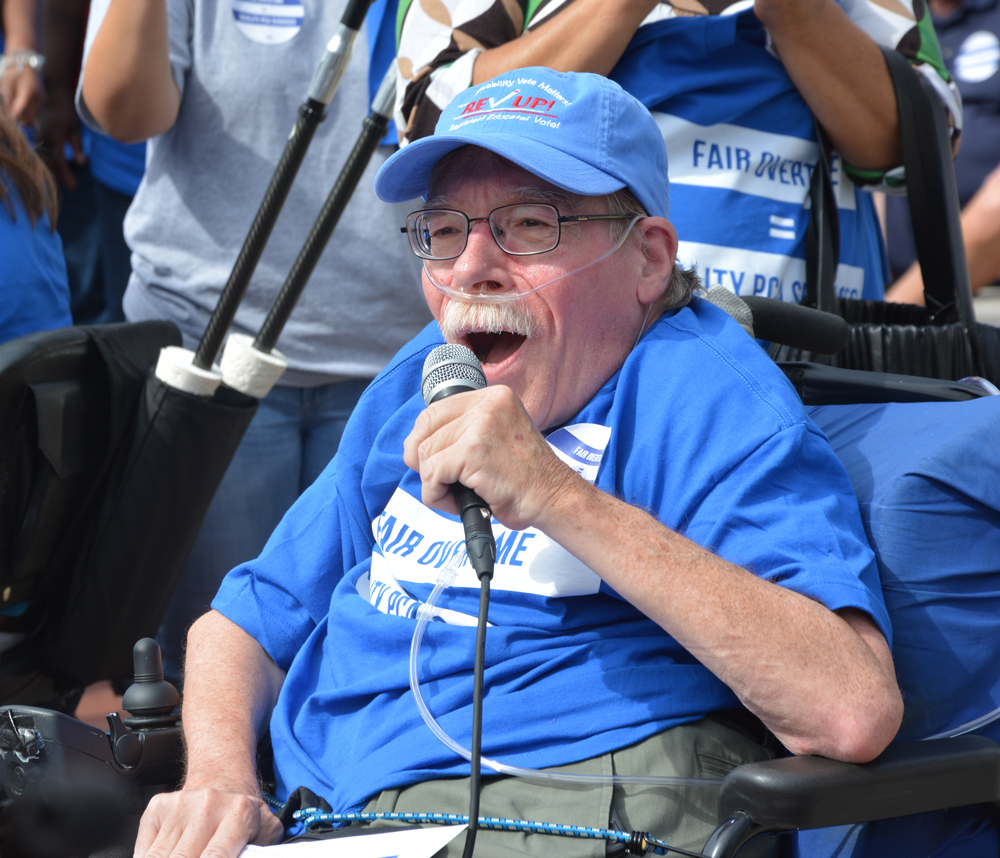 Massachusetts’ most stalwart disability rights advocate Paul W. Spooner died unexpectedly on October 8th, after a brief hospital stay. His life partner, Winifred McGraw, was by his side. He was 67 and had been a resident of Taunton for the last 28 years.

Paul was born in Hawaii and lived in both Japan and Switzerland, where his parents taught in the American schools, before returning to the United States at the age of 8 to be treated for a medical condition that ultimately left him with a permanent disability. He went on to graduate high school from the Massachusetts Hospital School in the class of 1973. He earned an undergraduate degree from Southeastern Massachusetts University (SMU) in 1981 and a Masters Degree in Rehabilitation Counseling from Assumption College in 1989.

The roots of Paul’s disability advocacy were born during his time at SMU, where he made very strong connections with students who had returned from the Vietnam War. He saw the crossover effects of being a Veteran and being a person with a disability and wanted to do something to improve access to education for all.

While going to school at SMU he began volunteering for a disability agency and became an original incorporator of Independence Associates in Lakeville, MA. He eventually left the board and became an employee, holding several positions before leaving in 1992 to work for the independent living center in Framingham, now known as the MetroWest Center for Independent Living (MWCIL) as executive director, a position he held until the time of his passing.

During his 3 decades at MWCIL, he worked hard in the trenches to see legislative decisions come to fruition that not only improved the lives of people with disabilities both locally and nationally, but also for the caring and dedicated personal care attendants who remain instrumental in insuring that people with disabilities remain in the community as full and equal participants. His temperament garnered him respect from his peers as well as with the cascade of legislators he worked with over the years. His crowning success was just confirmed on September 28th when word came down that a proposed expansion of the CommonHealth program was approved by federal officials. This will allow eligible individuals with disabilities who have worked in Massachusetts to retire without the loss of their major health insurance program. Paul will not see the benefit of this program for himself, but he’s sure to still be smiling over this success for others. Paul was never in this game for any type of accolade or personal gain. His mission was solely to insure a better existence for all people with disabilities.

When Paul took a break from his work he enjoyed traveling, was an avid photographer, bird watcher and lived for anything trains and military history. His interest in these pursuits was developed at a young age and shared frequently with his dad before his passing.

A video of Paul speaking about Independent Living, as well as a photo slideshow of Paul’s life can be found at MATalesOfIndependence.net.