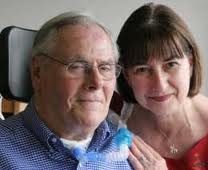 Max Starkloff passed away December 27, 2010. Amy Leavitt wrote an obituary for the Riverfront Times honoring his life and achievements. He will be greatly missed, especially by the Independent Living community.

Max Starkloff resided in St. Louis since his birth in 1937. When he was 21 years old, Max was involved in a disabling automobile accident. After an extended hospital stay and a subsequent stay with his mother for four years, the physical and financial strain associated with his care became overwhelming. At the time, the only option for someone with a severe disability was to move into a nursing home, where he resided for 12 years.

During this period, when his young contemporaries were beginning their careers, getting married, having children and buying homes, Max became frustrated with his desire to do more than merely survive his accident. He was not willing to accept the prognosis of a life of dependence for people with injuries like his. His frustrations mounted as he discovered firsthand society’s patronizing and negative attitudes toward people with disabilities and the lack of access and opportunity for an independent, fulfilling life.

Max was not about to relinquish his dignity. He used this time of confinement to create a plan to escape the bondage of institutional captivity. He learned to release his frustrations by expressing his anxiety on canvas with a paintbrush clenched between his teeth. Having discovered the joy and satisfaction of this new skill, he recognized his ability to create and envision new possibilities.

Max set out to make the necessary changes for a more fulfilling life, so that he, and others with disabilities, could live independently. From the nursing home in which he lived, Max founded a privately funded independent living center he called Paraquad. Around this time, he met Colleen, a physical therapist who came to work at the nursing home. She became excited about his ideas for independent living and joined him in his crusade. They also fell in love. Marriage followed in 1975.

When Max finally left the nursing home, they ran Paraquad as a “mom and pop” organization. Today, Paraquad is a permanent institution, providing independent living services and advocacy for thousands of people with disabilities, their families and employers.

Through Max’s accomplishments, people with disabilities in St. Louis have gained the opportunity to live independently. Below are a few of his achievements.

* Co-Founded Paraquad in 1970, with his wife, Colleen, as a privately funded Independent Living Center;
* Secured first ever stateside, barrier-free legislation for local and state curb cuts;
* Acquired disabled parking legislation;
* Established Paraquad as one of the original 10 federally funded Independent Living Centers in the nation;
* In 1970, founded the St. Louis Chapter of the National Paraplegia Foundation;
* Labored for access to public buildings and schools;
* Received a commitment from the local transportation authority to adopt a policy that all new buses will be wheelchair lift-equipped;
* Organized and spearheaded a large coalition of people with disabilities, volunteers and community leaders to support the above transportation policy;
* Consequently, St. Louis was the first city in the nation to have lift-equipped buses on their streets;
* Influenced St. Louis’ new light rail system to endorse and include total accessibility;
* Co-founder, and Founding President of the National Council on Independent Living;
* Served on the board of directors of the World Institute on Disability, Berkeley, California; Blue Cross/Blue Shield of Missouri; and Gazette International Networking Institute, St. Louis;

In 2003, Max and Colleen left Paraquad to establish the Starkloff Disability Institute. Now they are working with the St. Louis Community, and its leaders to begin changing societal attitudes about people with disabilities, by crafting and disseminating a positive message about living with disability. Their goal is to improve employment opportunities, which improves independent living and productivity, enabling people with disabilities to become contributing members of our society. Through their 40 years of work they realize that the non-disabled community must join with the disability community to ensure that disabled citizens are fully assimilated with the rest of our society.

The single most outstanding aspect of Max Starkloff’s contribution to the needs of people with disabilities is his record of achievement in developing a strong and expansive network of grassroots advocates for change. Through his direct contact with a wide spectrum of institutions and people who make the St. Louis metropolitan area a vital, accessible and growing community, he has become the community’s single most important resource and authority on disability issues. He is a dynamic example of living a full life as a person with disability, which enables him to connect civic leaders with grassroots advocates and with disability issues in a compelling way.