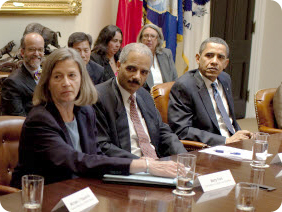 Liz Savage and Pat Wright are considered the “mothers of the ADA.” They led the consumer fight for the passage of the ADA.

Liz has been involved in disability policy for over 25 years and during the late 1980’s, coordinated the Congressional lobbying campaign, building a coalition of over 75 national disability, civil rights, religious and civic organizations that led to enactment of the ADA. She was “there” when the ADA was organized, was a key organizer/contributor to its passage, and can tell us how coalition can lead to true policy change.

While serving as Counsel to the Assistant Attorney General for Civil Rights during the Clinton Administration, Ms. Savage was intimately involved in the creation of the ADA Technical Assistance and ADA Mediation programs and served as an advisor to Assistant Attorneys General Deval Patrick and Bill Lann Lee on ADA enforcement.

Ms. Savage is the recipient of several awards for her disability rights work including The President’s Committee on the Employment of People with Disabilities Distinguished Service Award (1992) and the National Council on Independent Living Individual Achievement Award (1990).