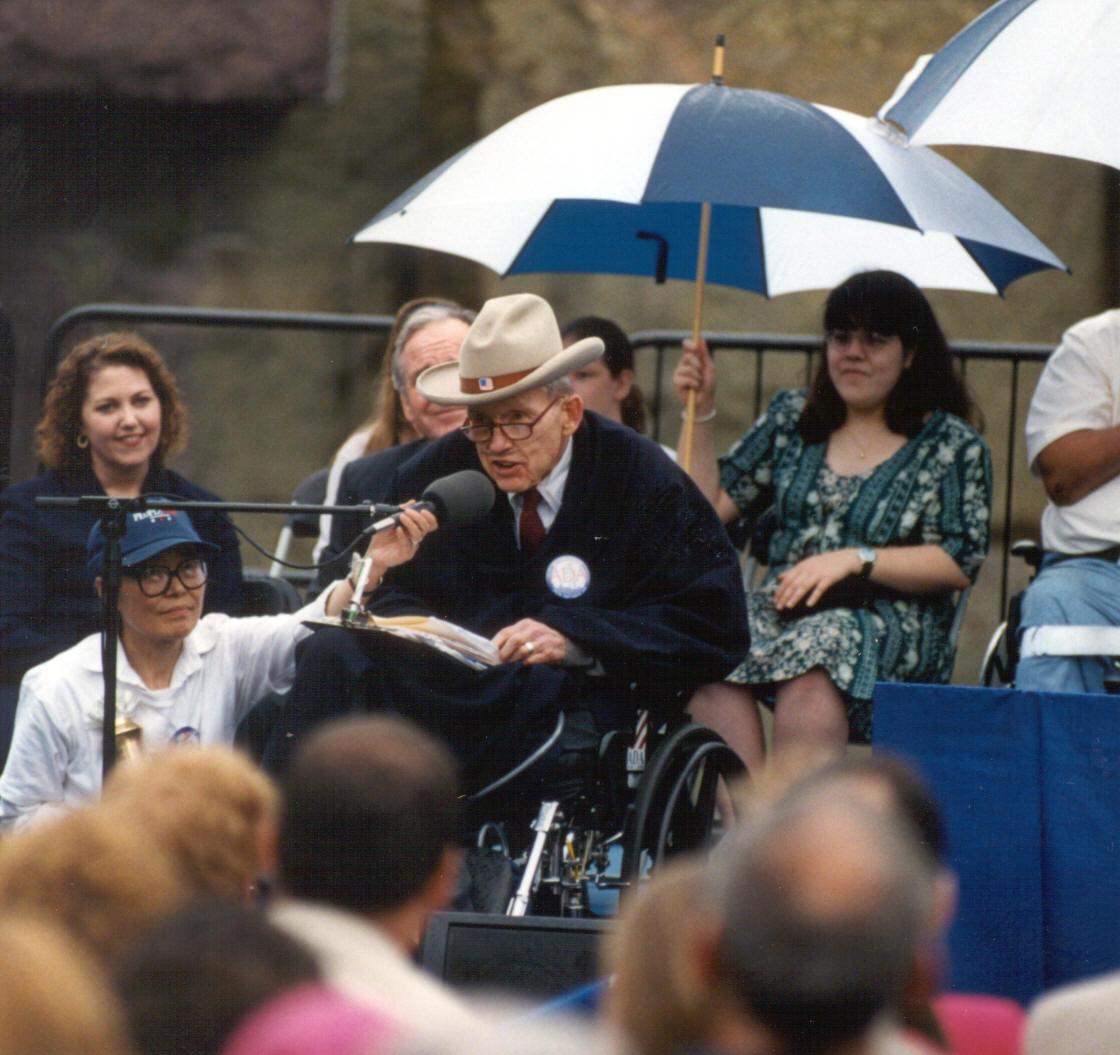 Few people in the disability rights movement understand the power, importance, and nature of grassroots organizing as well as Justin Dart. For over two decades he has been an advocate for justice, civil rights, and human potential in the United States and the world. In addition to their time, Justin and his wife Yoshiko have dedicated much of their financial resources to the betterment of people with disabilities. They have crossed the country sponsoring forums for a variety of campaigns, including advocacy for the Americans with Disabilities Act. Through their efforts, thousands of “discrimination diaries” became part of the evidence used to justify the ADA.

Born to wealth and prestige (his father eventually became a member of President Reagan’s “Kitchen Cabinet”) Justin had a difficult adolescence, and traces the beginnings of his “good days” in life to contracting polio at the age of 18, which left him without use of his legs and required use of a wheelchair. Around the same time he exposed himself to the philosophy of Gandhi, which gave him confidence that he could take responsibility for his life. In 1951, at the age of 21, he entered the University of Houston. Throughout the latter 1950s and the 1960s, with the support of his Executive Assistant and later wife Yoshiko Saji, Dart became a successful businessman in the U.S. and around the world.

Dart visited a Vietnamese institution for children with polio during the Vietnam War, and saw malnourished children packed into a shed infested with flies, urine, and feces. He responded by pledging his life to reform and devoted six years to philosophical reflection and introspection in the mountains of Japan. Dart and Yoshiko returned to Texas from Asia in 1978, soon after which Dart began his career in disability advocacy, participating in the Texas Governor’s Committee on the Handicapped, the National Council on the Handicapped, the Rehabilitation Services Administration, the President’s Committee on the Employment of People with Disabilities, the ADA Task Force on the Rights and Empowerment of People with Disabilities, and a multitude of local and national demonstrations.Dart received recognition from President Clinton in the form of the Presidential Medal of Freedom, the nation’s highest civilian award. Dart immediately removed the medal to bestow it upon his wife Yoshiko and insisted that it belonged to everyone in the disability rights movement. –from the NPR