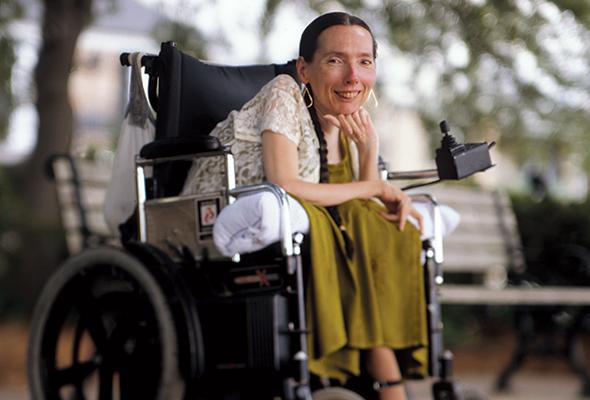 Harriet McBryde Johnson was born in 1957 in eastern North Carolina and lived most of her life in Charleston, South Carolina. She passed away in 2008.She attended self-contained special-education classes until age 13, when she was invited to leave because she was campaigning to get the teacher fired. At that time, there was no right to appeal; she would have been limited to home-bound instruction had her parents not convinced a private high school to give her a try. She has a B.S. in history from Charleston Southern University (1978), a Master’s in Public Administration from the College of Charleston (1981), and the J.D. from the University of South Carolina (1985). For over 13 years, she practiced law in Charleston, with at least 10 years in solo practice.

Before becoming a lawyer, she worked as a freelance technical writer/editor, a college sociology instructor, and a community organizer. She was chairwoman of the Charleston County Democratic Party executive committee (1988-2001); city party chair (1995-2000); secretary of city party (1989-95); national convention delegate (1996); president, Charleston County Democratic Women (1989-91); County Council candidate (1994); and a certified poll manager. She was a member of the board of directors of Protection and Advocacy for People with Disabilities and served on the steering committee of the National Lawyer’s Guild.

“My professional and political life is all about using words to influence behavior,” she says. “Persuading people requires conveying information, surely, but also eliciting emotions. Whether I’m writing a legal brief for a judge, an eye-catching press release or broadside, or a short letter to a semi-literate client, the basic challenge is the same.”

In her 2005 memoir, “Too Late to Die Young,” she said it was the Jerry Lewis muscular dystrophy telethon that sent her the message, for the first time, that her neuromusclular disease would kill her. As a result, she began living her childhood in tiny increments, marking time with thoughts such as, “When I die, I might as well die a kindergartner.”

Johnson drew national attention for her opposition to “the charity mentality” and “pity-based tactics” of the annual Lewis muscular dystrophy telethon. She protested the telethon for nearly 20 years.

She also drew national attention when she disagreed eloquently with bioethycist Peter Singer’s extreme views on the legalization of selective infanticide of children with disabilities.. The NY Times