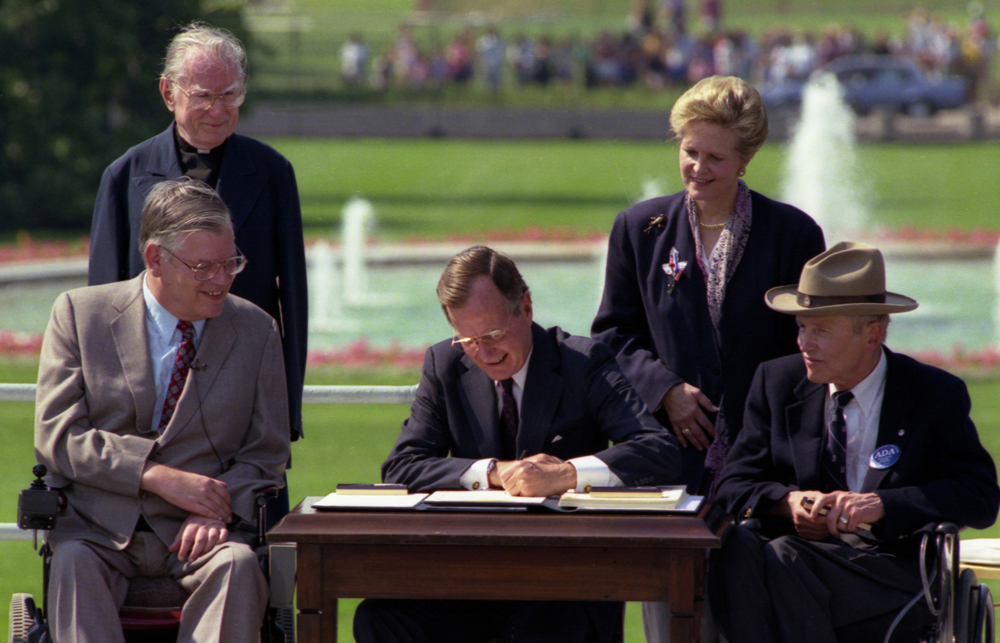 Evan Kemp was a key link for the disability community to George Bush and his administration during the 1980s and the ADA deliberations. During the 1970s, as a Washington attorney, Kemp struck a close friendship with (and found a long-time bridge partner in) C. Boyden Gray, Bush’s Chief Counsel. Kemp’s friendship was indispensable to Gray for understanding disability when the Reagan administration considered weakening disability-related regulations in the early 1980s. Through this process Kemp also developed a friendship with Bush, who began asking Kemp to write his speeches for disability-related events.

Bush secured Kemp an appointment as a commissioner for the Equal Employment Opportunity Commission during the Reagan administration. In 1990, Bush named him Chairman of the EEOC. President Bush’s impassioned support of the ADA was crucial for the ADA’s eventual success. Kemp was on the podium for the signing of the ADA in 1990.

Evan Kemp was born in New York City in 1937. At the age of 12 he began having symptoms of muscle weakness, and eventually learned that he had Kugelberg Weylander Syndrome, a rare form of muscular dystrophy. After graduating from University of Virginia Law School with honors, Kemp received rejections from 39 different law firms. He finally obtained a job with the Internal Revenue Service, and subsequently the Securities Exchange Commission. Discrimination persisted. After being denied promotion to a supervisory position because he used a wheelchair, Kemp successfully sued the SEC.

Kemp left the government in 1980 to lead the Ralph Nader-sponsored Disability Rights Center. In addition to battling the Reagan administration’s deregulatory efforts, Kemp wrote a series of articles and appeared on television and radio to protest the Jerry Lewis Telethons, which maintained debilitating stereotypes of people with disabilities as child-like, pitiable, unemployable, creatures. He also developed close ties to grassroots disability organizations such as ADAPT and joined a variety of disability rights campaigns.

After leaving EEOC in 1993, Kemp founded Evan Kemp and Associates, a business dedicated to providing products and services that enhanced the lives of people with disabilities. Kemp died in 1997 of conditions unrelated to his disability. He is honored, among other ways, through an annual presentation of the Evan Kemp Entrepeneurship Award by the President’s Committee on Employment of People with Disabilities. –from the NPR