2014 Independent Living Advocacy Award is presented to Christine Griffin in recognition of her career of leadership and commitment to advancing the civil and human rights of people with disabilities. 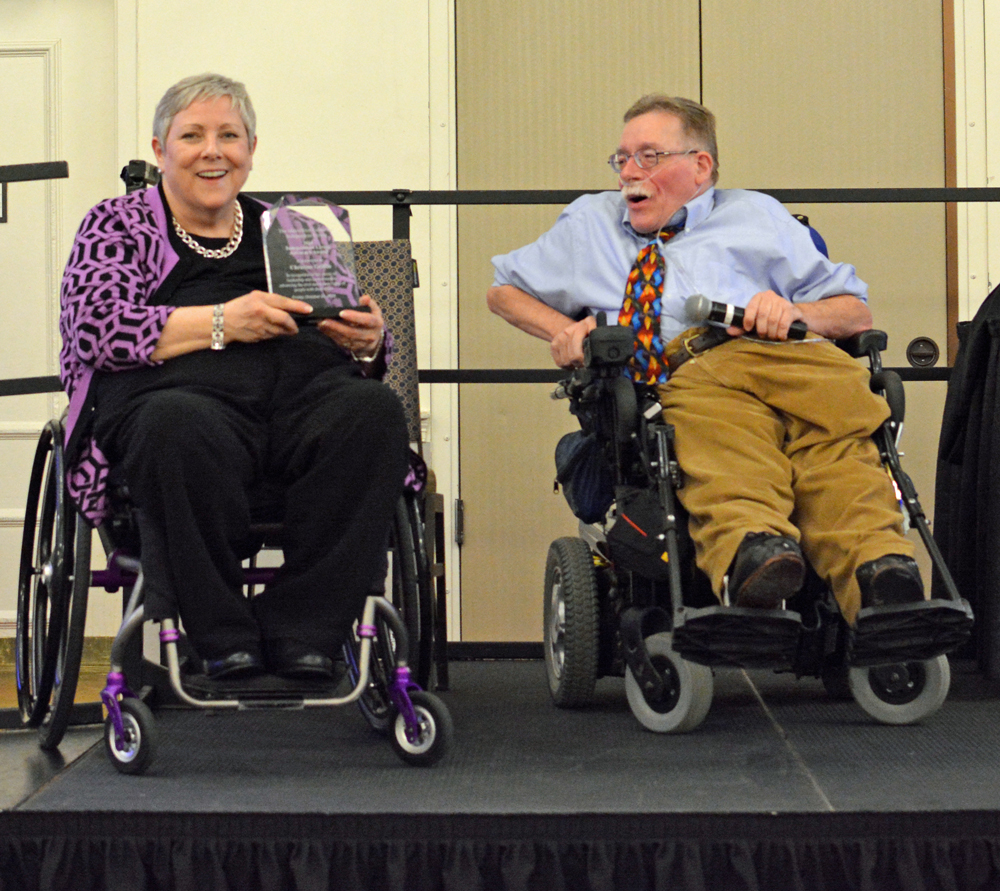 Christine Griffin, with a smile on her face, has a tough, no-nonsense, common sense, and educated approach to ensuring and improving the rights of people with disabilities.

She served nationally on the Equal Employment Opportunity Commission and the U. S. Office of Personnel Management.   She was responsible for implementing President Obama’s Executive Order on Increasing Employment of People with Disabilities in the Federal Government as well as establishing the first government wide initiative on Increasing Diversity and Inclusion in the Federal Workforce.

In Massachusetts, she worked for the MA Executive Office of Health and Human Services as the Assistant Secretary of Disability Policy and Programs.

Her current position is Executive Director of the Disability Law Center, which provides legal advocacy on disability issues that promote the fundamental rights of all people with disabilities to participate fully and equally in the social and economic life of Massachusetts.

Christine Griffin grew up in Dorchester, and served on active duty in the Army from 1974—1977, perhaps explaining her disciplined approach to advocacy! She then attended Mass. Maritime Academy to become a Marine Engineer. In spite of a car accident that left her partially paralyzed and using a wheelchair, she graduated with a B.S. in Marine Engineering. After a career in the medical device industry, Ms. Griffin graduated from Boston College Law School. While a student at B.C., Christine was hired as an intern to study the Americans with Disabilities Act for a Boston lobbyist. After graduating, she was awarded a Skadden Arps Fellowship at the Disability Law Center. She worked there for about 10 years (and has recently returned), and was named Lawyer of the Year by the Lawyers Weekly in 2005.

It’s hard to imagine how she has had time to work at all of the different jobs on her resume. Meanwhile, she always finds time to participate in IL Conferences, to advocate for curb cuts, and to share her expertise in employment opportunities and barriers. We greatly appreciate her dedication to Independent Living. Her advocacy makes a difference!

2014 Legislator of the Year Award is presented to Representative Tom Sannicandro in recognition of his leadership and steadfast advocacy in the Massachusetts legislature in behalf of the disability community.

His advocacy began when his son was born in 1984 with Down syndrome. Rep. Sannicandro and his wife, Mary Anne, were shocked when the kindergarten principal escorted them to a segregated special needs classroom. Tom and Mary Anne advocated, and their son became the first student with special needs in an inclusive classrooms in Ashland. Today, his son lives in the community, and has his own business.

When accepting an award from the Federation for Children with Special Needs, Sannicandro said: “We now have more than a generation of students who were educated with every other student, and had every opportunity and access to education as everybody else.” The expectations and opportunities for young adults with disabilities continue to improve, thanks to the Sannicandros’ advocacy.

Here is a subset of Sannicandro legislation:
• Real Lives Bill for People with Disabilities enables people with intellectual disabilities to make decisions that are central to how they live their lives through self-directed planning and by giving them the ability to control decisions about where they live, work, and their financial budgets.
• Worked with budget conference committee to change the name of the Department of Mental Retardation to Department of Developmental Services
• Introduced the Self Determination Bill that was signed by the Governor that will implement a model where Money will Follow the Person
• Has preserved millions for Family Support and Turning 22

In the community, Representative Sannicandro holds frequent informational events, such as his recent “College for Students with Intellectual Disabilities Info Night” on the Inclusive Concurrent Enrollment (ICE) program and MassBay’s Transitional Scholars Program. He understands that many people do not know what programs are available or even what their rights are. He doesn’t just ensure that needed laws are passed, he also works hard to educate his constituents.

MetroWest, and the Commonwealth, are grateful to Representative Sannicandro for his successful advocacy on Beacon Hill and in the community for people with disabilities.