MWCIL has awarded individuals for their exceptional commitment to improving the lives of people with disabilities. 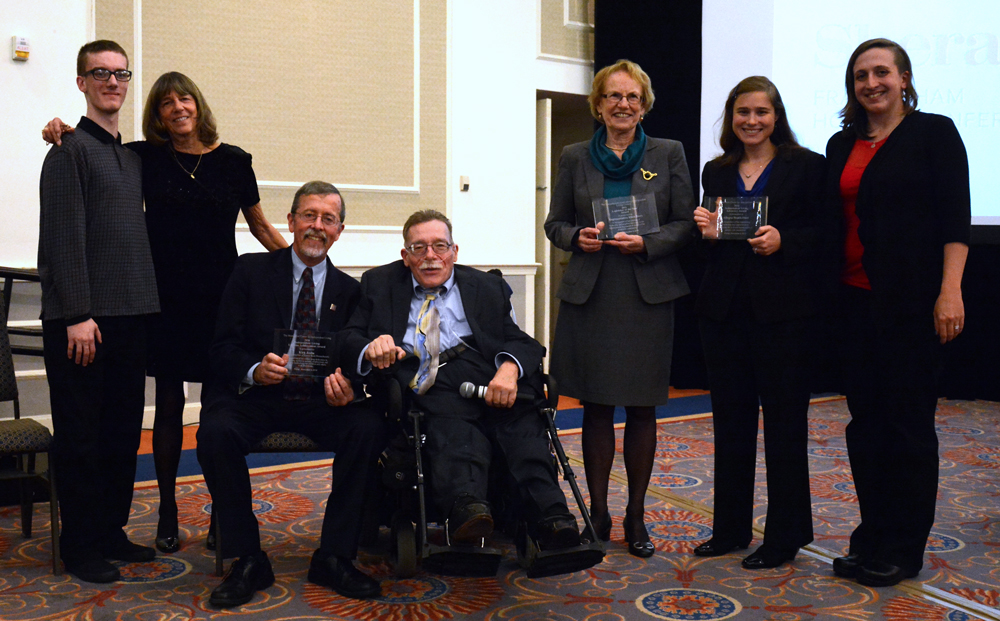 Photo: All of the 2016 Awardees with their families and Paul Spooner 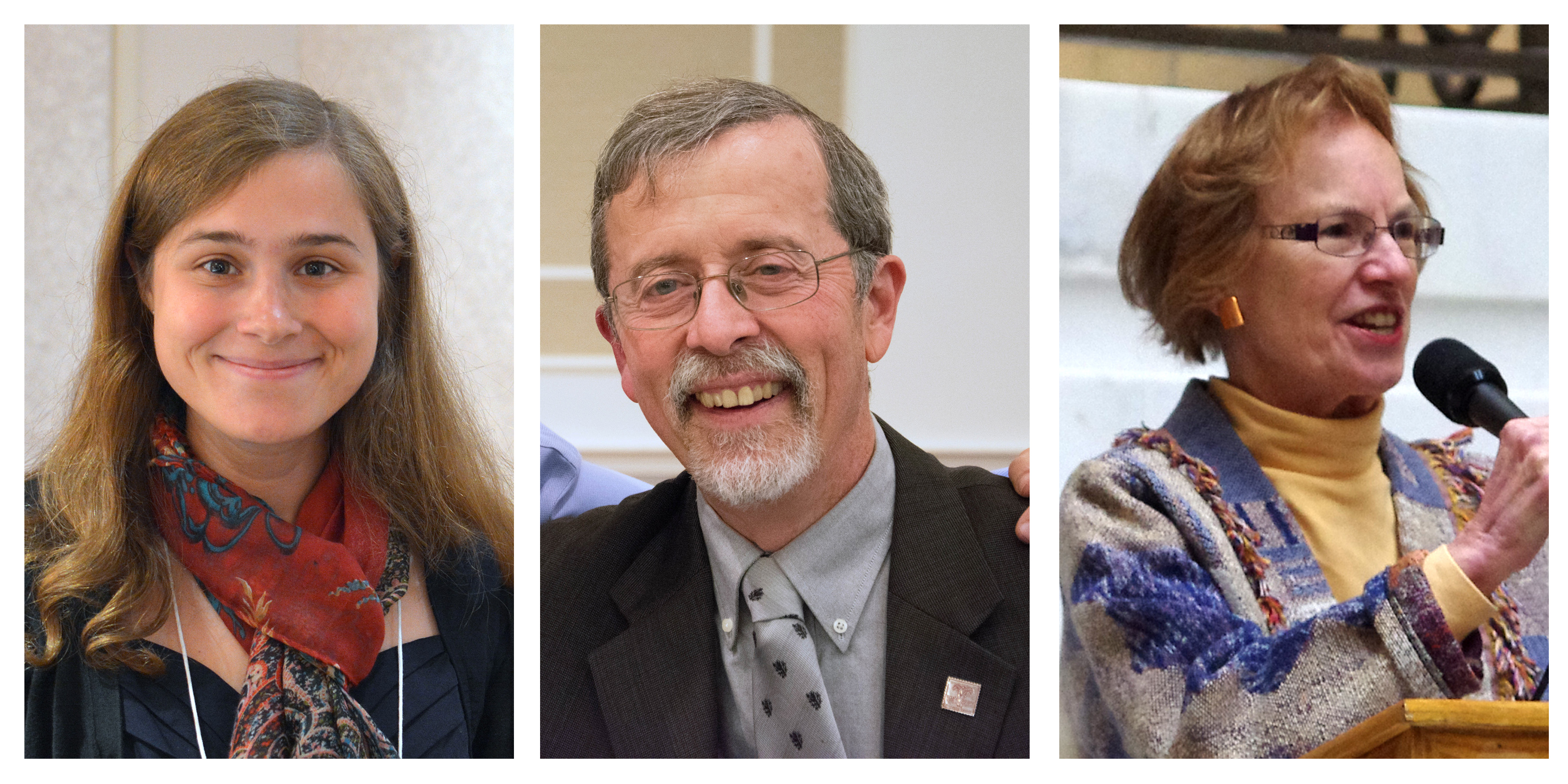 2016 Independent Living Advocacy Award is presented to Allegra Stout-Heath in recognition of her outstanding leadership and commitment to advancing the civil and human rights of people with disabilities. 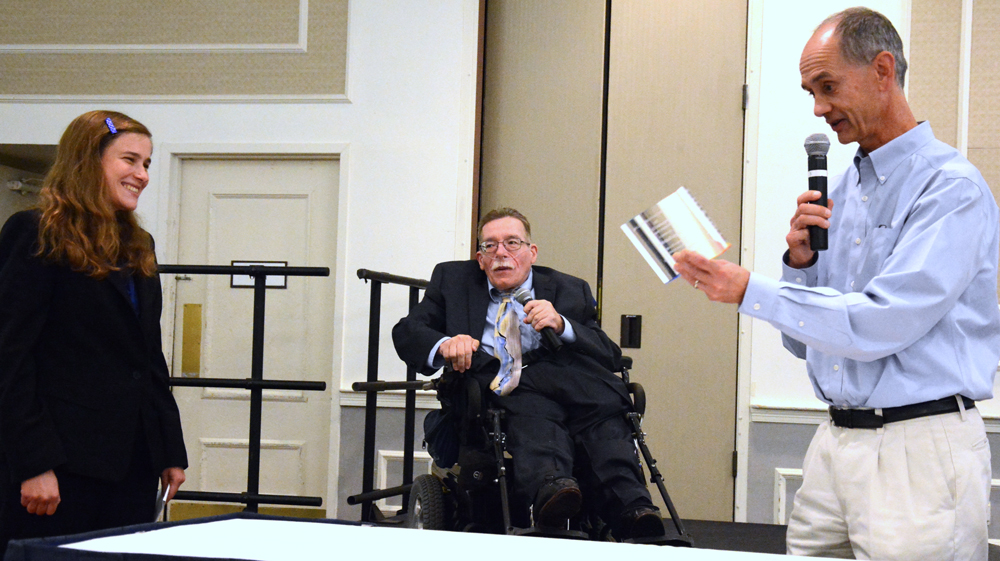 Fellowship Director and Trainer at the Jewish Organizing Institute and Network

At MetroWest Center for Independent Living, we got to know Allegra through her advocacy with Boston Center for Independent Living. She taught advocacy skills at our annual IL Conferences, and practiced it at our annual IL Education Day at the State House and at other actions. Her work on One Care and the RIDE was impressive, as she educated users and officials about the effects of new rules and legislation. She also has participated spiritedly in ADAPT actions in Washington D.C. Her work has ranged from giving testimony on various issues to teaching future advocates.

Allegra’s work over multiple years on the Alternative Housing Voucher Program (AHVP) was especially effective, as she recruited, organized and empowered consumers and advocates. Her AVP post cards were used by supporters to notify legislators, as well as for education on the needs. She rallied consumers to present their personal stories for housing. She changed the issue into common sense. The 2016 budget contained an additional 1,050,000 in funding for the program, largely thanks to Allegra’s coordinated efforts!

“I grew up attending National Organization for Women marches and meetings with my mom, and I was raised to be a feminist and a critical thinker. I also grew up volunteering with kids with disabilities, spurred by my relationship with my younger sister, who has Down syndrome. … I started a disability rights student group in my first semester at Wesleyan University, where I also gradually claimed my own identity as a disabled person. I led the group throughout my four years at Wesleyan, slowly building a vibrant disability community and working on campaigns such as a creating a Disability Studies course cluster and educating professors about the needs of students with disabilities.“ (from a JOIN interview with Allegra in 2013)

“I had the pleasure of working with Allegra on several critical IL issues. I learned so much from her about how to be a great advocate. She is a role model for both experienced activists and new advocates. Allegra brings out the best in everyone. I miss her already!“ by Dave Correia from MWCIL

Among the youngest of leaders in disability advocacy, we are sure that Allegra will continue to stand for the right side of civil rights. We sincerely thank her for her hard work and results, and will continue to work with her in the future

2016 Independent Living Lifetime Achievement Award is presented to Kirk Joslin in recognition of his career-long dedication to maximizing access to society, employment and assistive technology for children and adults with disabilities. 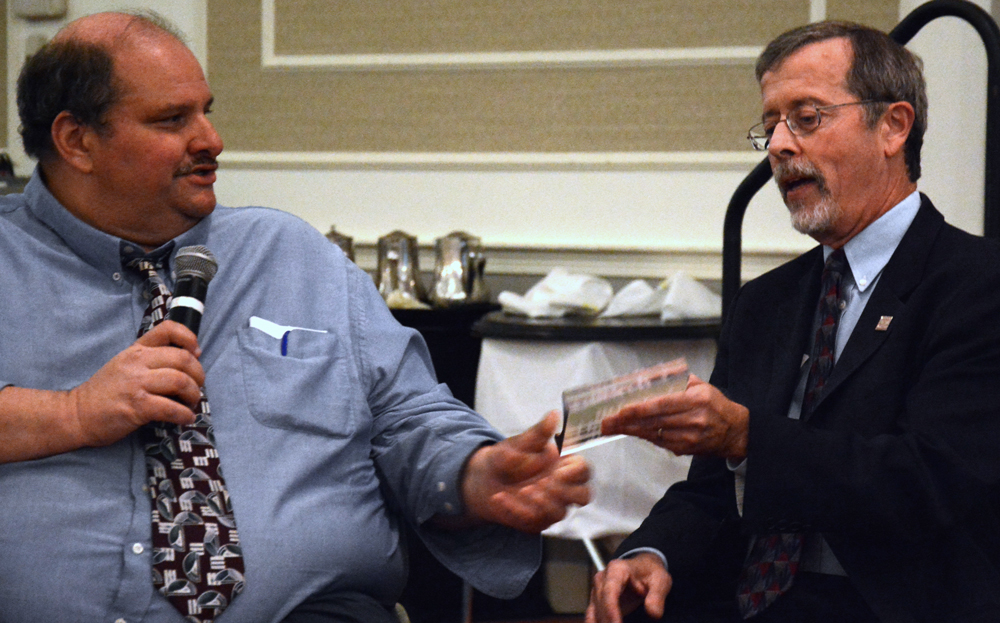 Kirk Joslin is been a great friend to MetroWest Center for Independent Living, attending our events, supporting our work and learning what our consumers need.

In a mature organization (originally National Society for Crippled Children in 1919), it is difficult to change direction, but Kirk Joslin definitely impacted the Easter Seals of Massachusetts. He joined Easter Seals in 1976 as an Advocate for Children with Disabilities. By 1996, he was President and CEO. Under Kirk, Easter Seals has become a critical resource for people with many different  disabilities in MA. He worked closely with a wide variety of organizations and people to ensure that donations met the needs, that the goals met the needs, and that state supports correctly served his consumers. Kirk and Easter Seals MA were recognized by the national Easter Seals for excellence and achievement in Assistive Technology and Youth Leadership Programs.

As President and CEO for 20 years, Kirk accomplished his vision and met the high level needs of Easter Seals, while remaining available to the individual staff and consumers. Not many people manage to accomplish both! A member of his staff, Jeanne Mahanna, said “He was always such a wonderful supporter of all staff, even visiting clients with us to see what was going on. He continues to maintain close relationships with many families that he has met through the years.”

When his wife, Sheila, was honored in 2008 as a “Person of Distinction by the Milford Daily News”, she chose Kirk as the person she most admired “He gives 300 percent to his job at Easter Seals. He takes the time and will drive anywhere in the state to know and be involved with the people Easter Seals helps.”

Kirk and Sheila are longtime residents of Holliston and they both continue to volunteer at Easter Seals.

2016 Legislator of the Year Award is presented to Representative Ellen Story in recognition of her lifetime of leadership and steadfast advocacy in the Massachusetts legislature in behalf of the disability community. 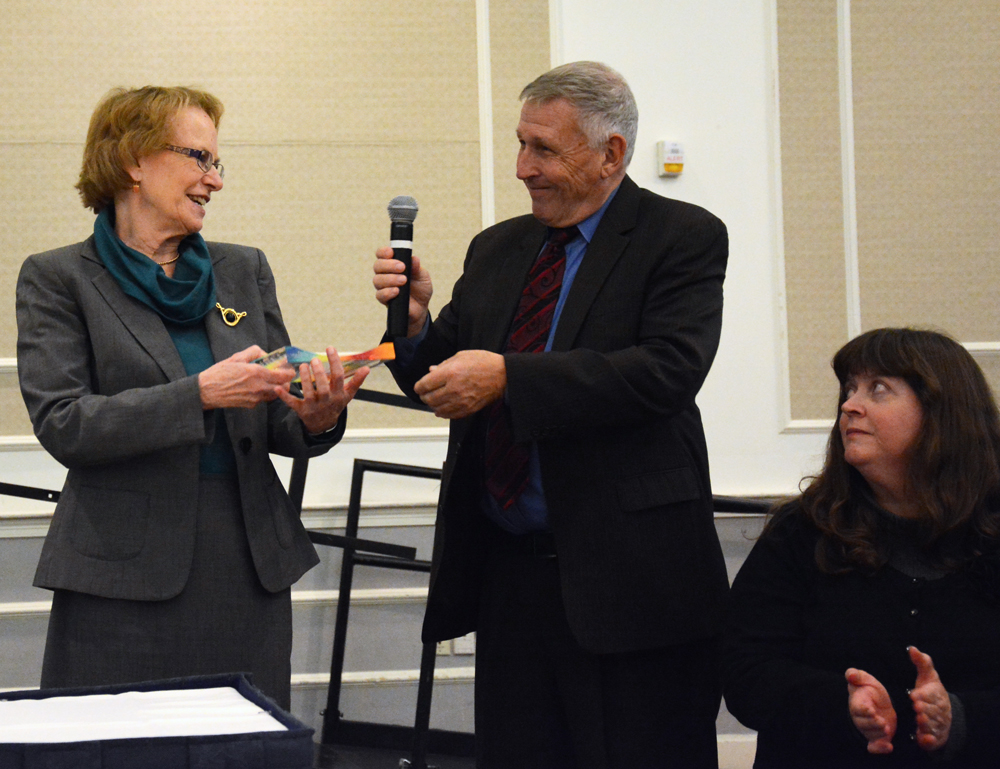 Ellen Story’s 12th full term as State Representative for Amherst, Pelham and Granby will be her last. She grew up in Texas and moved to Amherst in 1972. After being active in Amherst politics and government, she became the first woman to represent Amherst in the state legislature in 1992.

One of Representative Story’s most significant accomplishments was the 2001 passage of the “Stuck Kids” legislation. (Stuck Kids are clinically stable children who no longer need hospitalization for a psychiatric condition, but who cannot leave because of a lack of community mental health services. The number of children in this position became a documented crisis.)
“The Commonwealth of Massachusetts recognizes the need to create a commission to study and evaluate the delivery of mental health services to children,” the bill reads. “There is a lack of accountability and coordination of services for children in need of mental health care, many children have been deprived of appropriate, adequate or, in some cases, any care responsive to their needs.” Ultimately, the state had to track and provide solutions for children stuck in hospital beds when residential mental health placements were unavailable.

From Joe Tringali of Stavros: “She’s been a champion of the IL movement for years and the great supporter of Stavros. By the way she always held her annual fundraiser in an accessible location and came to our 45th anniversary celebration. She’s cool.“

From Bill Henning of Boston CIL: “Ellen has been an accessible, go-to person for all the ILCs—she’s been a real star, we wish her the absolute best.”

Below is a partial list of Representative Story’s impressive work for Independent Living: